us Cosmic Atlas - Discover in Depth

Map of the
Solar System

Images are NASA and ESA.
Hover over an image for specifics.

Images used on Map of the Solar System are all NASA.

It doesn't get bigger than this.

Two superpowers with one goal.

"Space is big. Really big. You just won't believe how vastly, hugely, mind-bogglingly big it is. I mean, you may think it's a long way down the road to the chemist, but that's just peanuts to space." Douglas Adams, The Hitchhiker's Guide to the Galaxy

The planets and the Sun sized to scale. Distances very much not to scale.

A scale model of the solar system

You can build your own solar system right now, with the right sizes and distances. You'll just need to raid the cupboards.

Find a sesame seed, two peas, a peppercorn, a tennis ball, a satsuma, and two coins (a British 10p or a US quarter is about right), and a beach ball.

Now let's go outside. Plonk your beach ball down—this represents the Sun—and now walk 29 metres away. Place down the sesame seed (be careful not to lose it). This seed is Mercury, and if you think it looks incomparably tiny compared to the distance you've just walked, you're right, and there's more to come.

Keep going, another 34 metres, and place down one of the peas. This is Venus.

20 metres later, place your other pea. This tiny green sphere is Earth. Feel lonely in all this space yet?

Mars will be represented by your peppercorn, 38 metres beyond Earth.

Now we have to walk, because Jupiter, your tennis ball, should be a full 181 metres beyond Mars.

Another 332 metres to go until you reach Saturn, where you can put down the satsuma. Can you still see the beach ball?

Now we're talking serious distance: put one of your coins down 705 metres from Saturn, to represent Uranus.

And finally (I hope you're not tired of walking yet), you'll have to go another 800 metres before you can put down your last coin, Neptune.

We are now over 2km from our beach-ball sized Sun. Hopefully this explains why I chose to make the Map of the Solar System not to scale!

So how far would we have to go if we wanted to place down Alpha Centauri, the nearest star system to the Sun?

Alpha Centauri is 4.35 light years away in real life, making it 20,578 km away, half the way around the world! And that's our closest neighbour...

There are 250 billion stars in this galaxy, stretched over 100,000 light years. The human brain wasn't designed to comprehend numbers this big.

In 1995, astronomers pointed the Hubble Space Telescope at an apparently empty patch of sky, where all that could be seen were a few stars in the Milky Way.

The picture they got back would have made anyone feel tiny: this little square of the night sky was filled with galaxies. In the years since, we have taken higher resolution images on even smaller patches of sky and found the same: the universe is even more full of galaxies than our galaxy is full of stars.

Space is very big, and we are most certainly very small. 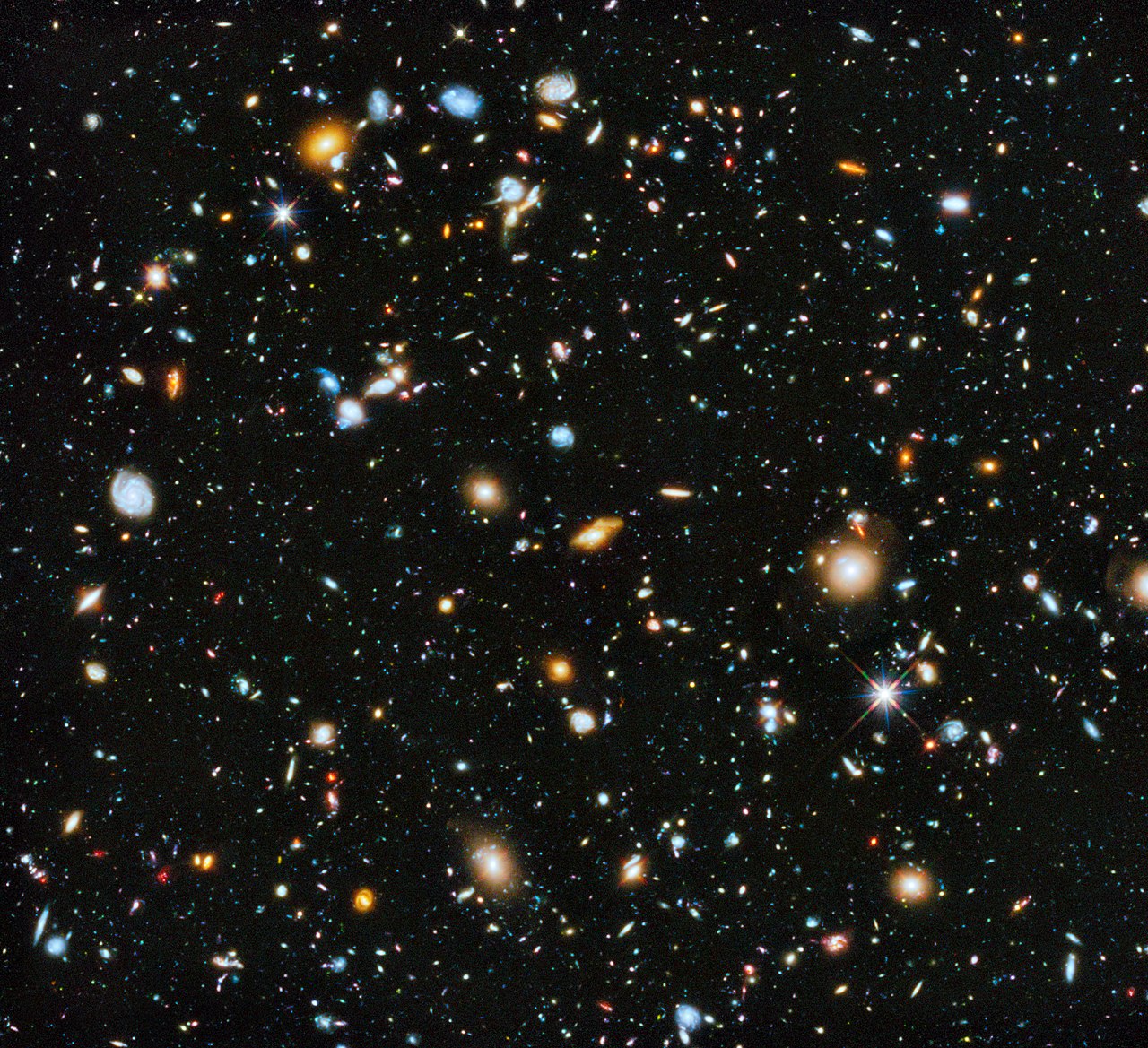 After World War II, the world saw the rise of two superpowers: the United States, and the Soviet Union. Both nations would spend decades, from the late 1940s to the early 1990s, in an uneasy standoff. This was called the Cold War, and it saw both sides trying to prove themselves the world’s dominant power.

Using the progress in rocket technology from the war, these two adversaries aimed for the stars, with the aim of exploring space—and most importantly, doing it first.

On 2nd August 1955, the Soviet Union (USSR) announced that they would be launching an artificial satellite into space. The USA had, just four days earlier, declared that they would do the same: the gauntlet had been thrown down and the Russians were eager to pick it up.

The Soviets scored the first blow in the Space Race on 4th October 1957 by launching Sputnik 1. It wasn’t much to look at, just a silver orb and antennae that transmitted beeps—but those beeps could be heard the world over, and everyone knew the Soviets were ahead.

The Americans launched their first satellite, Explorer 1, in January 1958, and detected the Van Allen radiation belt around Earth.

Six times the Soviets had to try to reach the moon, but they did it with Luna 2 which (intentionally) smashed itself into the moon on 14th September 1959.

A few weeks later, Luna 3 sent back to Earth the first ever pictures of the dark side of the Moon.

The American response was plagued with still more problems, and it wasn’t until July 1964 that the USA ran its first successful mission, Ranger 7, to the Moon (Ranger 4 had previously crashed into the Moon, but without returning any data).

“Poyekhali!”—(“Let’s go!”)—is what Yuri Gagarin, the first man in space, cried as Vostok 1 blasted off on 12th April 1961. Ten minutes later, he was in orbit. After just one trip round the Earth, skimming the upper atmosphere, he parachuted back to the ground, having bailed out of his spacecraft 7 km above the ground.

A farmer and his daughter watched the incredible sight of the orange-suited cosmonaut parachuting down nearby.

"When they saw me in my space suit and the parachute dragging alongside as I walked, they started to back away in fear. I told them, don't be afraid, I am a Soviet citizen like you, who has descended from space and I must find a telephone to call Moscow!"

Four months later, the first American in space was Alan Shepherd. The Americans had been bested again, but this time they would react strongly.

President John F. Kennedy, who had previously been opposed to continuing space exploration, realised how stung America had been by the Soviets’ success. The next year, he declared to the world a lofty goal: that by the end of the decade, the United States would land men on the Moon.

In September 1963, a year after his declaration, Kennedy actually suggested that the US and the USSR should work together in their efforts to reach the moon. Russian leader Nikita Khrushchev rejected the proposal—but later, Khrushchev’s son explained that he was prepared to accept it. Then, Kennedy was assassinated, and Khrushchev changed his mind.

The Soviets attempted to at least be the first to bring back lunar surface samples: their Luna 15 mission was actually heading to the moon at the same time as Apollo 11. But, while Apollo 11 was sitting on the Moon, ready to take off, Luna 15 crashed into the surface. A fitting end to the Space Race.

The Soviets diverted their attention to their space station prject, Salyut 1. However, after only one successful stay on the station by astronauts in 1971, they were tragically killed on re-entry. The Soyuz rockets were grounded, and without supplying rockets, Salyut ran out of fuel and fell out of the sky.

America's Skylab was more successful. Launched in 1973, it stayed up for over five years and provided humanity with a new space-based laboratory.

With little left to prove, the American and Soviet space programs started to work together more.

Tension between the nations was eased in a cooperative mission to dock an Apollo spacecraft with a Soyuz.

When the two spacecraft were connected, astronaut Thomas P. Stafford and cosmonaut Aleksei A. Leonov shook hands through the hatch, marking the end of competition.

So who won? Well, the USA in the end. But the rush by both countries pushed forward technology by years, and put man on the surface of another world. So didn't we all win? 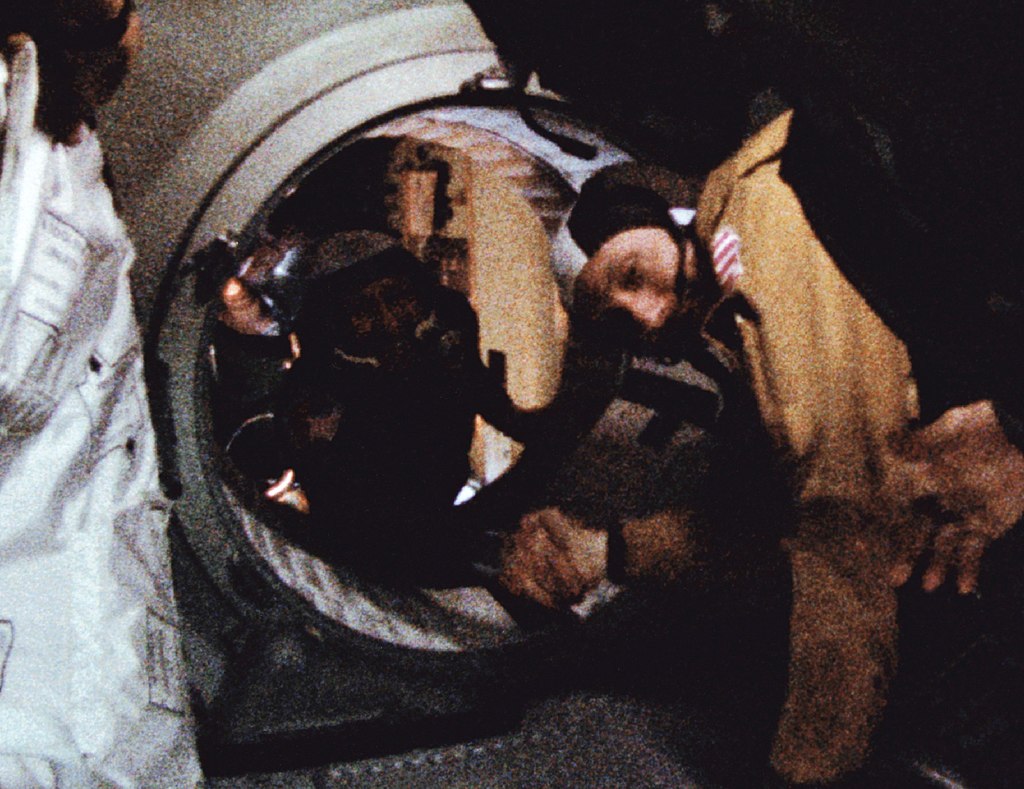 The historic handshake between American and Soviet.

You might have heard of the Drake equation. Written by Frank Drake in 1961, it makes guesses about how many planets there are out there, and how many of them could have life on them. Even assuming life is extremely rare, the Drake equation will still tell you that of the millions and billions of planets in our galaxy, some must surely harbour life—life on Earth can’t be that big of a coincidence, can it?

The Fermi paradox seems to contradict the idea that there's a lot of life out there. It asks, ‘if there are intelligent civilisations out there, some of them must be more technologically advanced that us, and be capable of travelling between stars—so why haven’t we heard from any of them?’

It’s a tricky question to answer. It could be telling us that life is even rarer than we believe it is. Or perhaps there is some reason that civilisations fail before they reach interstellar travel, in which case what will happen to humans?

Or perhaps we just haven’t been listening long enough—space is pretty big, after all. And only in the last few decades have we been discovering extrasolar planetsplanets orbiting other stars, many of which we believe are similar to Earth.

Astronomers have identified a list of rocky planets likely to have surface water, which is a good starting point for life as we know it.

Perhaps the most promising of these is the TRAPPIST-1 system. In 2017, astronomers discovered four planets in the habitable zonethe distance from a star that is neither too hot or too cold to support life around this small red dwarf star.

The planets are probably tidally locked, meaning that one side always faces their sun and is scorching hot, while the other side faces away and is freezing. But on the line between them is where temperatures, in liquid water, could be right for life.